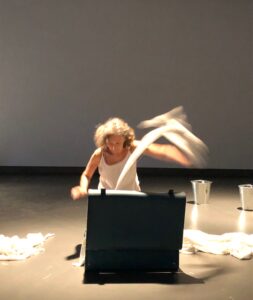 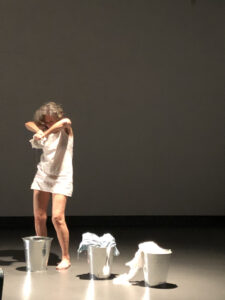 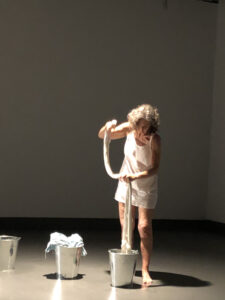 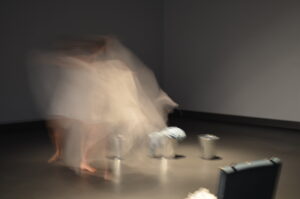 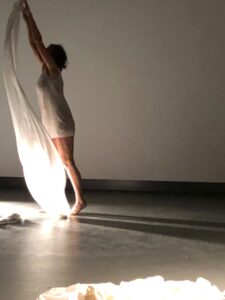 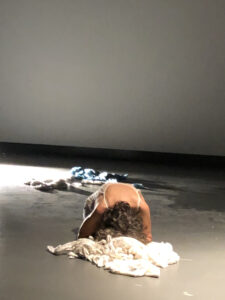 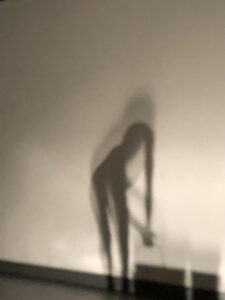 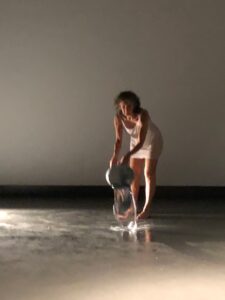 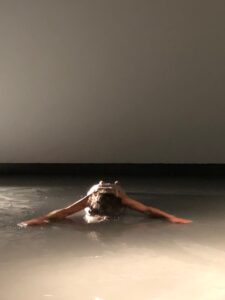 At the beginning of my menopause, I experienced some periods of reflecting on what I had or hadn’t achieved in life. This propelled a surge of performance ideas. I wrote a monologue and made a short video depicting myself swimming back and forth in a blue swimming pool, with the black line demarcating the lane directly underneath me, blurring and moving with the ripples of the water. I used the monologue as a voice over and gave it the title 49 and three quarters (2010). This video became the impetus for this research.

Before I embarked on my PhD, I travelled to India to undertake a teaching internship. This trip became the genesis for my first investigations driven by questioning why some Western women of middle age were visiting ashrams in India. I wondered if retreat and contemplation could assist in the physical and spiritual transitions of menopause. I considered whether this might suggest a self-searching for these female travelers or a passage to spiritual enlightenment, perhaps another way to perceive their own self-worth, and prepare for their “change of life”.

On commencing my doctoral studies, my attention returned to my own perceived changes of body and mind. In his book The Anthropology of Performance, cultural anthropologist Victor Turner describes this paring away as a “release of the constraints of the interior body through disciplines”.[1] I understand this to mean a stripping away of social constraints that have been imposed on the female body and psyche, and that might be recognised and released at a time of transformation. I began to realise I wanted to convey the experience of transformation in my work. I wanted to capture a sensation of stripping away the layers of conditioning—of obligation, responsibility, and social expectations.

The implications of the preliminary research became far-reaching. I realised that there was much to do—a woman’s transition through menopause is, as Germaine Greer suggests in her book The Change (1991), at best considered by patriarchy as a non-event.[3] However, as I questioned my own change of identity, status and social visibility, I wondered why menopause was not celebrated as significant. Greer’s book became a key text in my preliminary investigations, providing insights into the necessity for rites of passage at menopause.

I became interested in exploring through performance art the idea of an in-between state, the beginning transition through menopause. In preliminary portrait experiments, I began with ideas about photographing women experiencing menopause. However, I was concerned about how to capture the life-transition photographically and decided instead to use myself as the subject. Using the self-timer, I concentrated on a meditation technique in order to be unaware of the camera. The pose was difficult to assume for long and towards the end of the session, the body took over from the self-imposed constraints of the process and is evident in the shaking of the head leading to distortion in the images.[2] This blurring, caused by my movements, appears to be resistance brought about by sense of self endeavouring to escape from the intensity of imposed constraints, which I term masque.

It was at this point that I understood menopause as a physiological experience that coerces a change of identity where one may enter an in-between state of being. During this state, there is an opportunity to move away from or deny social signs that may steer menopausal women towards expectations of how she should look or behave. This process of change may appear and be experienced for a while as somewhat chaotic due to the metamorphosis taking place. However, this potential turmoil may lead toward masque’s dissolution, an empowered self, and it led to my research statement Performing the Transformative.